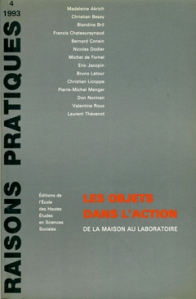 After several years studying the mind experimentally, I was growing increasingly frustrated with applying the learnings from the laboratory to understand real-life situations. The work of  Lucy Suchman, Ed Hutchins and Donald Norman on situated and distributed cognition accelerated the shift from in vitro to in vivo research.  I turned to the study of behaviour in context, using observational and ethnographic methods. The ethnomethodologist Bernard Conein was a terrific mentor and research partner during this transition. We took our videocameras in many inaccessible workplaces!

As part of  learning about situated and distributed cognition, I undertook the translation of Don Norman’s seminal text Cognitive Artifacts into French for the review Raisons Pratiques.

Emerging expertise in process control, written with Valerie Lagrange and published in Ergonomics 42 (Issue 11, 1999) is a case study of the local, situated nature of expertise based on the micro-analysis of  audio-video recordings of operators decreasing power production in a nuclear power plant, an operation with a significant manual element. Cognitive research defends an abstract view of expertise as the ability to anticipate future states to guide selection and timing of appropriate actions. According to the dominant view, expertise lies in mentally envisioning the evolution of the situation, planning the future course of action, handling rare exceptions as they arise. In-depth observations of how expert operators carry out power production regulation led us to a very different conclusion. Expert operators regulate power level through a series of progressively adjusted control actions – neither extensively planned beforehand nor parametrized in any detail – that instanciate a high-level plan of the operation.  The trade-off between the multiple objectives and parameters at play in the manoeuvre is constructed in the course of this interaction with tight feed-forward and feed-back loops,  This research led to the redesign of few key information displays in the control room to provide better support to the interaction loops.

The focus of these articles was on explaining human actions and activities in highly technical contexts. Andy Clark has pushed the boundary between individuals and technical systems one step further and studied technical systems who amplify human abilities by being directly embedded in the body. I reviewed Andy Clark’s NaturalBornCyborgs_review for Interactions Magazine.